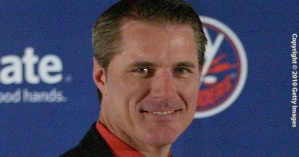 9. Long Island News 12 producer Rob Del Muro with a good tip: Islanders GM Garth Snow attended a season-ticket holder event last week and told one fan, “It would be a safe wager on his part that we would utilize this year’s (first-round draft) pick.” The team has until June 1 to let the Buffalo Sabres know about the selection. If not, Buffalo gets New York’s 2015 first-rounder. The GM added the fan “could wager any amount of money because it wasn’t MY money.” Good line.

“Utilize.” That doesn’t exactly sound like “we will be using the pick to draft a player” now does it.

The conditional 5th-overall pick in question is the one that could be property of the Buffalo Sabres as part of the Matt Moulson/Thomas Vanek deal. An abysmal ending to the season netted the Isles a VERY useful asset. While this draft is not projected to be deep, relatively or realistically, having a top-5 pick isn’t a bad thing. It’s an asset at this point. All the cupboards are full, there’s no need to go shopping again.

10. Snow also said the Islanders had a deal worked out for a goalie, but backed off when the trade partner asked for Brock Nelson.

Funny. Garth turned down trading away a very big part of his team’s future for a goalie, a position he could later address with a 4th-round pick. A 4th. There is nothing pointing to Snow turning the #5 into any goalie available this summer. If Halak doesn’t sign, Snow will simply reacquire a 4th and spend the cash he has promised he would.

What to do with the pick? Defense. Established blueliners do not grow on trees, or fall out of the lineups of the competition. To land your #1 defenseman you will have to pay. And a #1 defenseman is what most expect to put the Islanders back into the playoffs.

PK Subban has priced himself out of EVERYONE’S budget in these playoffs. The pick and Brock Nelson would be the starting point of any trade negotiations. And that might not even be half the expected price. Shea Weber may actually be cheaper to trade for and pay for, as Nashville may have to take back salary to move him. Speculation, that’s all the last sentence represents. The trade price for Subban will be higher than for Weber. That’s all.

And the trade price for any defenseman the Islanders need will indeed start with that 5th-overall pick. Which is the best usage of that pick this summer. THAT is the splash the Isles need to make to show fans and prospective players that they are serious.