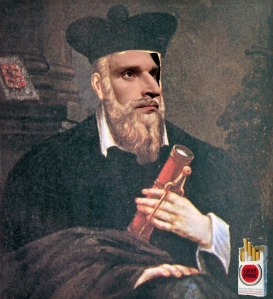 Peer into the haze of the Lucky Strikes and behold the future!

1. The Colorado Avalanche coax Claude Lemieux out of retirement for their first game against Minnesota next season. Matt Cooke out with the flu for the next 5 years.

3. Patrick Marleau re-named Captain of the San Jose Sharks, leads Sharks to 2015 StanBWAHAHAHAHAHAHAHAHAH I’m sorry, I can’t even, it’s too much.

4. Winnipeg and Carolina are extremely busy with goaltending. The Jets get Reimer (TOR) and Ward (CAR), Snow trades Nilsson to Carolina.

5. “Whoever loses out on the (Ryan) Miller sweepstakes will automatically be looking into signing (Jonas) Hiller”, according to every GM who thinks their fanbase can’t read.

6. Teemu Selanne does indeed retire from the NHL for one last stint with Jokerit, wins KHL RotY with 76 goals.