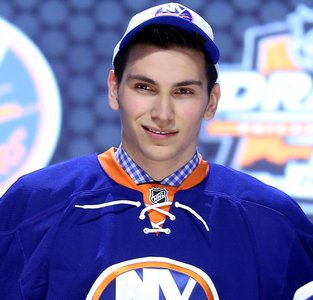 Size up the 18 year olds and put the FOR SALE stickers on the vets, it’s time for the 2014 NHL Entry Draft. The floor is now open to make deals.

The 2014 NHL Draft was shocking in the sense that nothing shocking really happened. Aaron Ekblad was taken by the Florida Panthers after hours of trade speculation *COUGH*TORONTO*COUGH*DREGER*COUGH* surrounding the first overall pick. The top-5 were essentially everyone’s top-5, and the top-20 went as predicted.

Garth Snow drafted seven players. He took LW/C Michael Dal Colle, the projected/assumed 5th overall…5th overall. He then used two of his 2nd-round picks to snag the 28th overall pick to go with highly skilled wild card Josh Ho-Sang. Two goalies, a defenseman, and two more centers later, Snow has added pieces to the cupboard. I had him moving the 5th and having no firsts for two consecutive drafts, and instead he snagged that late first this year to cover his bases. Sound moves to position himself well in this draft, especially with the acquisition of another 1st-rounder this year.

Outside of the drafting, the trade front was a bust in the face of such an array of players who have been gossiped about since February. Kesler moved but not Spezza. No Evander Kane trade. No self-immolation by teams looking to get under the new $69M salary cap.

All trades will be analyzed with two metrics:

The Garth Scale measures the (non)-impact Garth Snow had on this deal, ranging from five (no fault/couldn’t be involved) to zero (fireable offense).

Here’s the recap of player-based transactions.

Snow used his best movable assets to get a second 1st-Rd pick to make up for the loss his 2015 1st.

Vancouver had been dealing with this for a while. Kesler wanted out but his NMC (to only Chicago or Anaheim) bound the hands of new Canucks GM Jim Benning. It was the Jarome Iginla situation on repeat. Vancouver gets a 2/3 center with some upside, a 1st-Round pick, and a living human. Both players give Vancouver cap friendly deals while the Ducks now have Getzlaf-Kesler at center, and that’s kind of scary in spite of Kesler’s loss of speed and recent injuries. Anaheim is now more prepared to take on LA and Chicago in the playoffs. Can’t wait for the gold medal/silver medal rivalry to make things interesting.

Garrison goes back to the Sunshine State. He had a NTC but this could have been an NHL defenseman with decent size the Islanders need. This is a salary dump, ultimately. While Garrison is physical that’s his only asset. Wonder what his criteria for going to Tampa was. Costello is a college prospect.

You don’t trade with the Rangers, especially for a 3rd-line nothing. Crazy Vancouver.

No idea who Nick Spaling is, Hornqvist can pot a few, but Neal is a sniper. Jim Rutherford clearing house yet got reasonable value for an absolute douche bag. Unless Neal had any sort of No-Move, Josh Baliey could have replaced wither piece in the deal. Then again, Rutherford may not have wanted to trade within the division and get burned multiple times a year.

Vey was lost in the shuffle of LA’s forwards and needed a change of scenery.

Roman Polak is the “physical stay-at-home” defenseman Toronto loves. Gunnarsson no longer has to be a Leaf. Same old Toronto.

Chicago dumped a bad contract and got a mid-level pick in return. Calgary gets a good character guy and former St Lawrence Saint, to play 3rd and 4th line minutes.

Winnipeg stockpiled picks and Washington has another goalie for the pipeline to be molded by new Capitals goalie coach Mitch Korn. Anytime you can have a young goaltender under Korn’s watch it’s a good day.

So a good weekend for Garth Snow and a generally boring day for the rest of the league.

Now begins the wait for July 1st at noon.