via HockeyDB.com
(I have this card!)

You look for greatness wherever you can. The 9th round of the 1989 NHL Entry Draft, perhaps. And maybe, just maybe, your seven game legacy will cement you in the annals of time itself.


Iain James Fraser was that draft pick. The young center started slow but ended his Junior career with a bang, Fraser became a nearly 2PPG player with Oshawa and reaching 40G his final year. The New York Islanders saw the potential and used the 233rd pick of the 1989 NHL Entry Draft to take the OHL shotshot.

His first professional assignment came with the Islanders’ AHL affiliate in Ablany, the Capital District Islanders. Fraser played for the CD Islanders for their entire three year existence and is the fourth-highest point producer in team history (55G – 93A – 148Pts, 0.98PPG).

Armed with such promising stats the NY Islanders recalled Fraser late in the 1992-92 campaign. His stint in Nassau County lasted a mere 7 games as he registered 2-2-4Pts and 2PIM. He saw no time in the playoffs for the big Islanders that year. This statistical line places his atop the mountain of players who have appeared in precisely 7 games for the New York Islanders. Tom Draper is the only goaltender in this exclusive fraternity.

The Season with Dallas was the beginning of four teams in three years. Fraser bounced from Dallas, to Edmonton, then Winnipeg, ultimately ending his NHL career in San Jose. He only appeared in 27 games over that span and collected collected sparse numbers (4G – 1A – 5Pts 6PIM). The highlight of his Fraser’s professional career was four playoff appearances with Winnipeg in the 1996 playoffs versus Detroit. The Red Wings won the series 4-2 and Fraser was held off the scoresheet. Two stints back in the AHL (Springfield under Winnipeg, Kentucky under San Jose) again showed a skill set more attuned to the minor league level.

After his NHL career concluded Iain played in Europe from 1998 to 2007 (save for one year with Fresno of the WCHL). Fraser enjoyed modest success in his three team tour of Germany, winding down his playing career in England and Italy. 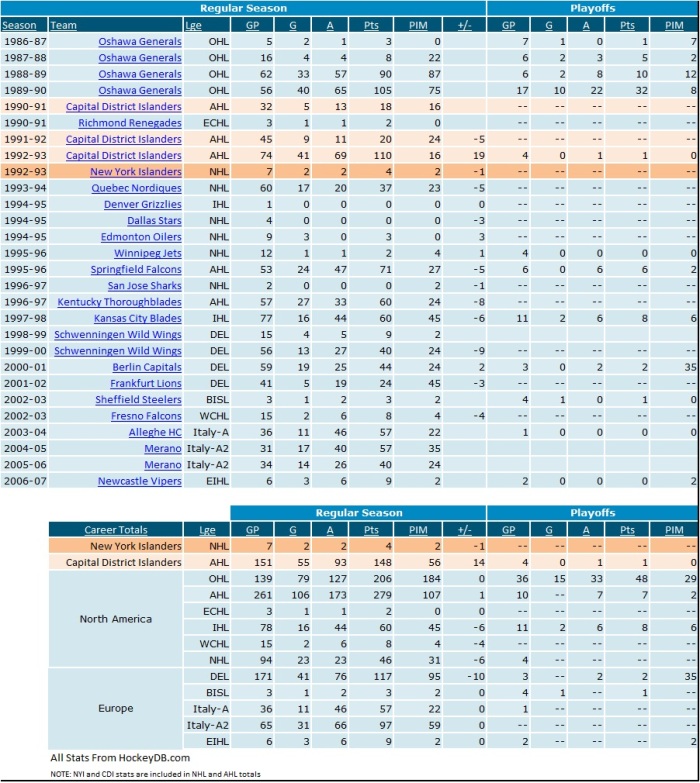 Upon returning to North America Fraser settled in Louisville, Kentucky, not far from where he last played in the AHL. Fraser has spent the last few years involved in the Central Kentucky Hockey Association and as a part of Total Package Hockey in the Kentucky and Alabama. He is applying his professional playing knowledge and experience to his new role as coach of the Tri-State Spartans Tier-1 AAA hockey team.