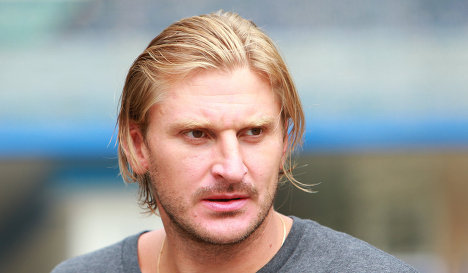 The greatest story ever told happened during the 2000-01 preseason.

Three months after trade that would give us the name “Mad Mike”, I was wandering around the concourse of NVMC looking for anything. The Devils were casually pacing themselves to a 9-0 win of no significance and I was there because tickets were dirt cheap with a Hofstra ID. When you’re a freshman you’ll take any discount you can.

In need (re: no need at all) of a new hat, I stopped at one of the merchandise kiosks. Little kids didn’t care what dad was buying for them, dad was annoyed he was spending money on this hapless team. I was annoying the merch attendant with pointless questions about head measurements. Then…he appeared.

A towering young man with a thick Russian accent and striking blond hair. He was The One who Milbury coveted.

He was Oleg Kvasha.

The nearly 22-year-old wing was making his triumphant debut at the Coliseum, at a merchandise stand. “One polo, white, please. Big, please.”

What? Yes, the centerpiece of the Luongo trade was forced to buy his own New York Islanders polo shirt, during an exhibition game, among the plebiscite masses.

This first year of Charles & Sanjay. The fifth year of Milbury. All the kid wanted was a shirt and he was reduced to a common fan. We should’ve known what the next 14 years would hold.

2 thoughts on “The Oleg Story”